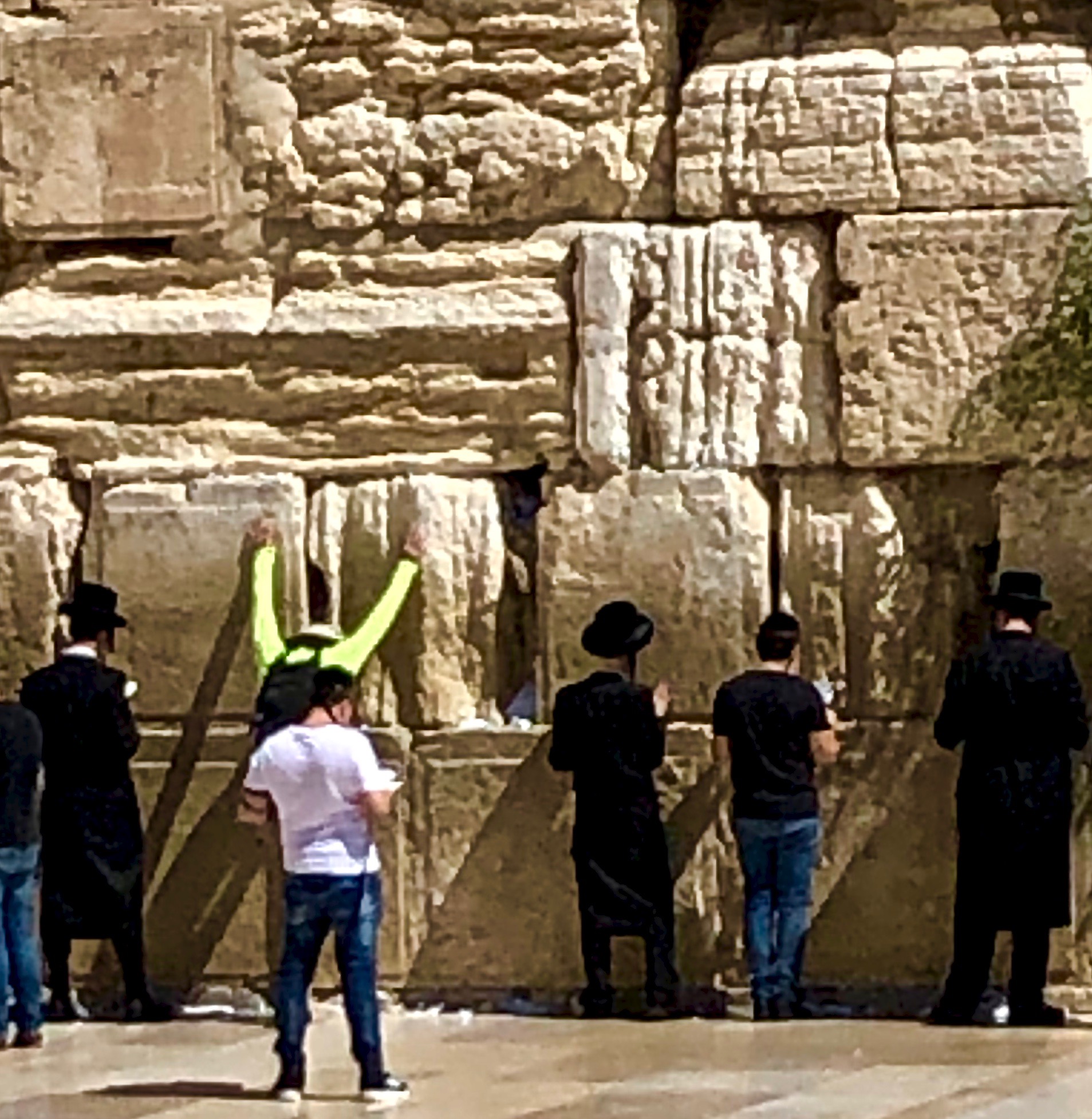 I prayed at the Wailing Wall, leaning into the experience.

Felt like talking to a wall.  But then the more I leaned into it, I began to think less of men’s murmurs to Him, and more of Him.

We left Jerusalem.  Bethyl dropped me off to hike a section of the path heading south while she drove to our room for the night. Hoped for quiet.

My path started broad and easy, with little springs, mikvehs for Jewish men to splash around. Later, the path ended narrow, dark, hard.

The first five miles were mostly along a 4×4 pitted track. I moved along the side a forested mountain behind me.  If you were just dropped here by a spaceship, maybe you’d think Colorado.  Lots of green, hills edged with deep valleys.

But then you come round a bend and see 20 ft high metal fencing, riding the ridge line across from where you’re walking.  Wake-up call.

Palestine is over there in these Judean mountains, and oh yes, there’s Bethlehem, up on the left.

After a half-dozen miles, the path narrowed.

The narrowing tunnel under a train trestle, at the bottom of the ridge should have been a clue. Things were going to get harder.

Afternoon’s light was fading. About six-ish.  Clambered up an increasingly narrow creek bed for a mile or two, flushed some quail, scared a fox or two back into the forest, climbed a few dry waterfalls.  No other people, eery quiet.

Arrived at the edge of Mevo Beitar, our Israeli fenced moshav for the night.  The gate was closed and locked.  Night fell, like an ax.  Barbed wire on fence-top.  Phone flashlight.  Thorny underbrush.  Felt my way along.  Fell into brambles.

Prayed, “Jesus, I wrote about you walking this land in the dark.  And you had no GPS, no flashlight, no comfy hiking shoes with smart-wool socks, no wife waiting for you just across a fence, no back-up plans.  Help me out, here.”

I found a section of the ten-foot fence where the barb wire was missing. Instead, a few spiky, steel points along the top.  Tore my pants, bruised my butt, but broke no bones when I dropped on the other side.  A few minutes later, arrived safe at home.

Thought about Carl Jung’s path of individuation.  Not much different than today.  Begin with a crowd, thin it out, narrow the trail, arrive at a dead end.  So here’s the plan. When you’re the edge of what you know:  pray, probe, persist. Move carefully. The wall may have been put there for your protection, or education. There’s more to life than arriving safely at death’s door.